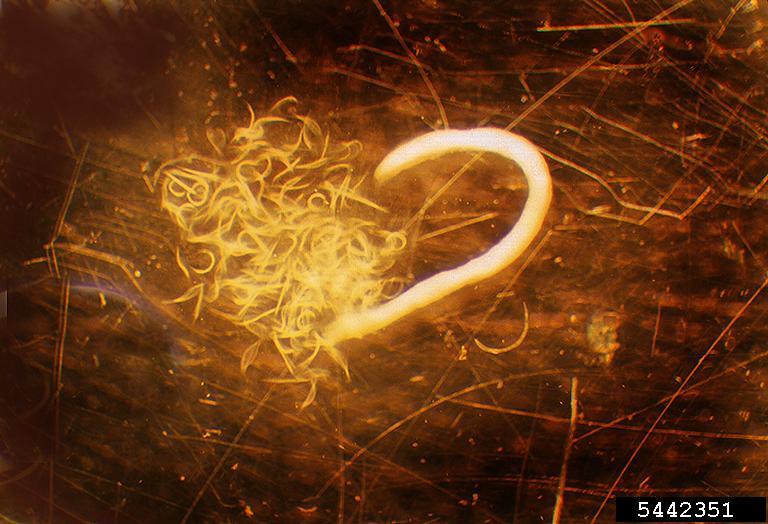 Beekeepers have a brand new weapon in their arsenal in the form of beneficial nematodes for controlling small hive beetles!

What are Beneficial Nematodes?

Nematodes are more commonly called roundworm. There are thousands of species of nematodes and many are beneficial nematodes. They are a nearly microscopic worm. Many species live in soils, fresh and salt-water, and about every other environment on the planet.

These two species are at the same time completely harmless to pets, humans, and plants. They do not require regulation by the EPA or the FDA.

How do they kill and control small hive beetles?

Both of these species are Entomopathogenic nematodes. They complete their lifecycles by invading a small hive beetles body and then producing bacteria which the developing nematodes feed on. In this process, they also produce toxins which cause the death of the small hive beetle.

The nematodes reproduce and emerge from the small hive beetles cadaver as infective juveniles and then begin burrowing through your soil looking for the next small hive beetle adult or larva and the cycle repeats.

How quickly do they work?

The lifecycle of both H. Indica and S. Riobrave take about 12-15 days at room temperature. This is the time from when a juvenile enters a small hive beetle and the next generation of juvenile nematodes emerge from the dead host.

This means that they begin working the day they enter your soil, cause a die-off within 48 hours, and will produce an explosive growth of nematodes within 12-15 days, which will then fan out through your soil looking for more small hives beetles. This process repeats until they run out of food sources.

How often should I treat my bee yard?

Several studies have been done by universities on using these nematodes to control small hive beetles. Effective kill rates were between 85% and 95% after only a single application. In these studies, small hive beetle populations were controlled for about 19 weeks.

This means that you should treat about three times a year for the best results. Due to the temperature that nematodes thrive at, the best application is in the early spring and early fall.

You should continue to treat though every couple of weeks until the small hive beetle is under control in your bee yards.

How many nematodes do I need to treat my bee yard?

This will depend a lot on how bad your hive beetle problem is. A good rule of thumb is about 5 million nematodes per 10 hives. The reason for this is that not all nematodes will find a host small hive beetle and therefore will not be able to reproduce. These are microscopic worms, unseen by the unaided eye. In their world, 3 feet is a long way! So making sure that enough nematodes are put into the soil, and near enough the larval small hive beetles or adults is paramount.

In general small hive beetle larva will emerge from your hives and not go more than about 36 inches before burrowing into the ground and pupating. So adding enough nematodes in an area 36 inches around your hives will take a lot of these very small, microscopic worms.

Do they harm honey bees?

In the research I have found, they do not contribute to honey bee mortality. Depending on the study you read, this mortality ranges from 0% to 10%, though the 10% mortality was by purposefully inoculating Apis M. with large doses of these nematodes directly, and not by using them as directed, watered into the soil around the hives.

I lose more than 10% of my hives every year from beehives absconding due to high beetle loads. For me, this is a no-brainer. These nematodes kill small hive beetles, wax moths, and red fire ants, all the bane of my beekeeper existence.

Where can I buy Beneficial nematodes for controlling small hive beetles?